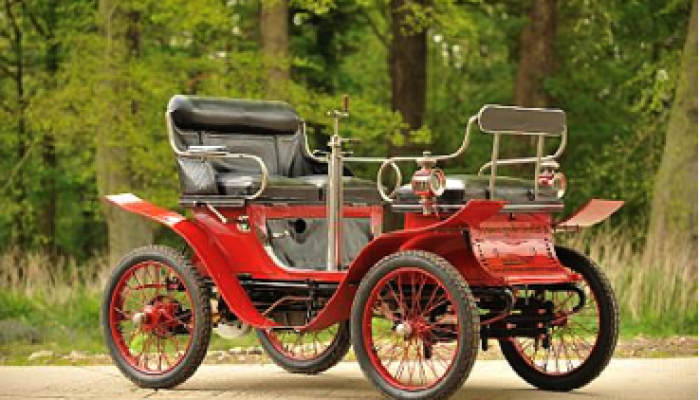 Julian’s Vis a Vis (or in this case simply VISA)

To round out the collection of veteran De Dions, Julian thought he would bid on a 1901 De Dion coming up for auction in the U.K. He discussed the budget, and Gavin watched with interest the bidding on the said night. I had arranged to collect Gavin the following morning to visit Julian and I arrived to learn that the final bid was well above said budget.

We made our way to Glen Avenue, and as is usual on a Sunday morning Julian was in the workshop. Gavin said that we were sorry about the De Dion’s final price and Julian said that he was sorry too, as he paid more than he thought he would. Hence the name VISA became appropriate.

Julian’s collection of veterans has, from memory, grown larger than the Rainsford’s at its peak. Unfortunately, without there being any ‘register’ as time passes and memories fade’ these things become part of folk lore with all the inaccuracies that entails.

We were invited in for coffee, where Jane and her mother were looking at pictures of the car. Jane asked how it worked when both seats faced each other. I explained that the driver sat in the front of course, but as he faced backwards the forward facing passengers told him which way to turn. Jane’s mother said to her ‘I don’t think you had better ride in that one dear’!!

The car finally arrived and after some initial tidying up the day came to start it – and it was obtuse. Eventually, after realising that it is a left hand rotating motor we moved the contact breaker the other way and the right noises happened, but the motor slowed only with fully retarded spark (which was still advanced). The exhaust valve regulator when moved, stopped the motor, and the carburettor has no throttle as such, but is a mixture control so that just makes more or less black smoke.

We retired to consider all that had gone before and as Clan Mc Neil was headed off for a white Christmas, Julian removed the 4 bolts and presented me with the engine. 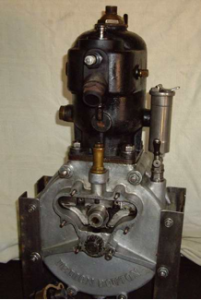 Having rebuilt and run several of these singles, including a 1902 Model ‘O’ which now is a London to Brighton entrant I knew what it was supposed to do and was confident that something was awry.

With the motor out it was easy to attach a degree chart and immediately it was clear that things were not in order. Movement of the exhaust regulator, which should slow the motor, lifted the valve from its seat and held it there. With the regulator in its rest position the exhaust valve opened 90 before bottom and remained open 45 after top. It shouldn’t have run at all ! Little wonder it was a bit hard to start. Looking around the car we found a late model ignition coil attached, and a spurious condenser across the breaker points so someone else had been having difficulty too. The De Dion breaker is actually a contact ‘maker’, inappropriate for a modern induction coil, which is designed to spark on the break.

Having recorded where things happened, the timing case was removed, and it was easy to see what was wrong. My thoughts of simply re timing the cam evaporated, as rotating the cam showed the lifter finger bearing on the cam in all the wrong places. Then the lights came on – the cam follower is from a larger motor, probably a 6 h.p. I made a dummy, with a threaded spindle so I could gradually alter the critical length until the right looking numbers were achieved on the degree chart.

Jane thought it was disappointing that there was a problem with the motor, but Julian put her mind at rest when he pointed out that were it not so, probably the previous owner would not have sold it, and if he did, it would have been expensive. 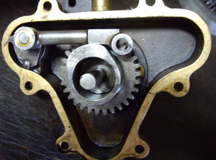 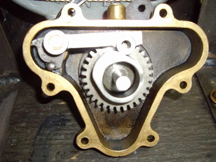 A few words about the model. De Dion made single cylinder engines for their own vehicles and others, from 1895 to 1912. After a series of tricycles and quads, a four seated voiturette was produced in 1899, with a 2 ¾ hp air cooled motor with detachable water cooled head. There was an expanding clutch 2 speed gear with no reverse. Before the end of the year the motor was replaced with a 3 ½ hp water cooled version, and by October 1900 the engine size was increased to 4 ½ h.p., and had the variable exhaust valve lifter and a reverse gear fitted. About 3000 of those motors were produced, before the model was dropped for1902, when either 6 h.p. or 8 h.p. became available in a front engined configuration.

What that tells us is that if Julian had bought an older one we would not have the exhaust valve regulator to worry about. Conversely, those who have driven De Dions so equipped will know the ease of driving, as the motor slows nicely as the brake pedal is depressed, being interconnected with the hand control, which is needed when the car is idling with no driver at the helm.

So how does this marvel work? There is a finger cam follower, on the flat top surface of which the tappet is lifted. One end is radiused and bears on the cam while the other, instead of being anchored on a pin in the normal way, is pegged to a flange on a spindle which can be rotated by the hand lever or the first half of the foot brake travel.

Mecredy’s book tells us that by operating the control, successively retarding the exhaust valve opening ‘thereby retaining burnt gases so that a lesser fresh charge be admitted, producing less power’. That is probably so, but consider also, that by the consequential later closing of the valve, the induction doesn’t commence until some 20 degrees after top. Being an automatic inlet valve, there is no hope of anything happening until the exhaust closes. Also, through some magic of plane geometry, the duration of the exhaust opening is decreased (by some 20 degrees). So there’s more going on than Mecredy offered, perhaps because he didn’t understand it any better than I do.

The De Dion replica parts maker in England doesn’t have a replacement for the small engine, but tells us that he has enquiries for the same part for the larger single motors, which they are known to break. Once again, we see that even well made parts, under stress, fail over time, as indeed has Frank’s 1913 Lagonda crankshaft. Unless you have deep pockets, gentle exercise is the formula to extend the life of our treasures, which are already past their intended use – by date. 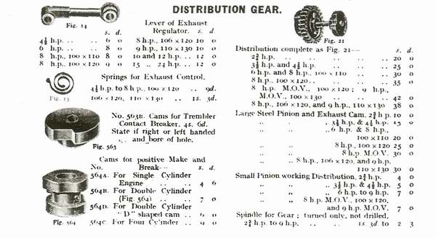 This contemporary advertisement also suggests that the cam follower might have been a fast moving item in more ways than one !!

Another 4 ½ hp motor was located and the owner didn’t mind the timing case being removed for a look at the lifter. With great ceremony and a 10mm spanner the enthusiast removed the cover – to find everything present except the lifter. Back to the drawing board, when a whisper was heard from a Member about another 4 ½ HP motor interstate. Very kindly, the owner, who doesn’t know us from Adam, removed and photographed his lifter – also a 6 hp part!! Looks suspiciously like the smaller lifters were too light for the job, and were replaced by the wrong one. Nothing else for it but to produce a new lifter to the dimensions obtained from the dummy. The new part was made from tool steel and heat treated, and the motor re assembled.

Julian re fitted the motor, which started more easily and behaved better, although some time was taken in sorting the complex set of linkages, previously altered by those attempting to run the motor with the wrong cam follower.

All of this may yet prove to be futile, as the car has yet to face a hill!! For the next instalment, be at Strathalbyn, where ALSO the National Motor Museum proposes to have their Vis a Vis De Dion, which will be a rare treat – you probably would have to visit the London to Brighton run to match that. 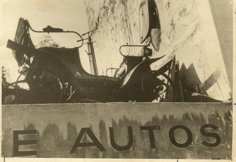 The car is a 1900 3 ½ h.p. and is said to be the one pictured as a display on a French auto dealer’s building. Some time after the second World War it was taken to USA where it was kept in a fairly significant collection.

The American collection was broken up and the car came to Australia and was for years part of the Gilltrap museum in Queensland.   Restoration to it’s current condition was done by Julian Sterling in N.S.W. The specifications are the same as for Julian Mc Neil’s car, except for the smaller motor.