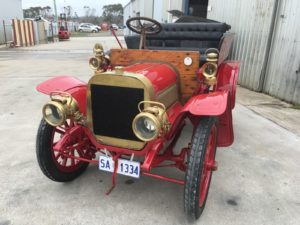 This Argyll was built at the Hozier Street Engineering Works at Bridgetown Glasgow. The company had been set up by a young engineer, Alexander Govan in 1899. Argyll cars enjoyed early success due to wins in motoring trials and an aggressive advertising campaign to at one stage become the second most productive car company in Europe. The success was short-lived however as in 1905 the company moved to Alexandria, north of Glasgow to a specifically built factory that could be only be described as palatial, the façade of which still stands today. This move was followed by the early death of Alexander Govan at the age of 38 from a cerebral haemorrhage. These events put the company into bankruptcy by 1908. The Argyll Company continued under new management but was wound up just before the First World War.

Many Argylls were sold in South Australia in some part due to the efforts of S. Cheney a salesman for the Duncan and Fraser Motor Company, later to become better known as the South Australian agent for the Model T Ford and subsequent Ford cars.

This car was bought from the sale of ‘Terry’s School for Chauffers and Mechanics’ which operated in Victoria Square between the wars and was sold up in 1947. Its initial restoration was completed by Mr Reg Jamieson, a noted veteran car collector, who rallied it extensively in the 1950s to 1970s. It was often driven by his wife and was affectionately know as ‘Mary of Argyll’ after the popular song. 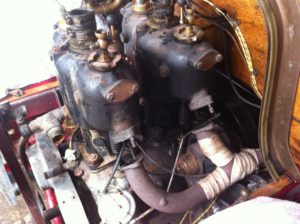 It has a twin cylinder Aster Engine – these were French proprietary engines that Argyll subsequently made under licence. The gearbox is a Govan patent gearbox made to avoid the Renault patent ,which first allowed straight through drive in top gear. The two gear levers in the Govan patent were a bad design flaw theoretically allowing two gears to be engaged at once, so not many survived. 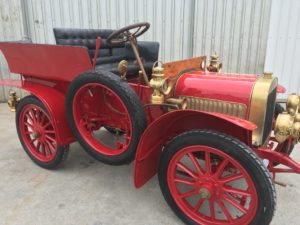 The body is a ‘dog-cart’ with a rear entrance door with passensers in the rear compartment facing one another. It is a direct copy from horse drawn vehicles and fulfills the purpose of a utility vehicle – the sort that an estate would have to collect passengers and their bags from the local railway station or to carry the dogs on a hunt. An 10-12 HP Argyll would cost 350 pounds in 1905 which was expensive as at the time others could be had for about 200 pounds. 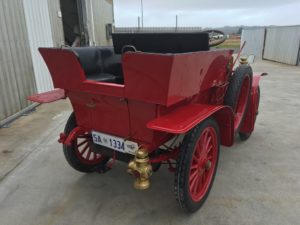 I bought the car from Bill Jamieson several years ago and have gradually re-restored the car which was extremely tired and had experienced a 50’s restoration which was a bit rough around the edges. This involved some work on the gearbox at Kingston Brothers in Tasmania, considerable body work, new electrics and fitting of a twin cylinder high tension magneto in addition to the battery and coil ignition thanks to Terry Parker, a more correct oiler (it previously had a Wolseley one no doubt copied from my fathers car, probably courtesy of the Defence standards laboratories where Reg worked), securing and re-plumbing the petrol tank then over to Tassie and under the supervision of Francis Ransley for a new paint job and leather upholstery. It also has a new set of Rotax Lamps.

Jane and I took it on the recent National Rally in Tasmania and with it large twin cylinder motor it went very well until we took it to the rally display in Ulverstone. A very loud bang was heard, the engine stopped and was then immovable on the crank handle. This car doesn’t like to be displayed because a similar thing happened when it was going to the display at the Goulbourn National Rally last year. Then the yoke that throws the clutch broke and it had to be retired. A days work for myself, Francis and Dennis and a very capable volunteer found the trouble which was a broken pin which located the gudgeon pin. The remains were found crushed in the sump. Fortunately the bores were not scored and all in all I got out of it relatively lightly as I had all sorts of dark thoughts like ‘broken crankshaft’ or ‘broken conrod’ just after it happened. So next day Francis and I took it into Launceston to Grey Brothers Engineering where it joined a queue of engines for reconditioning. 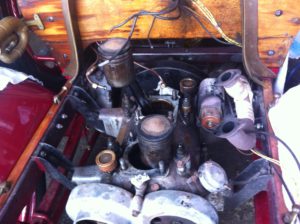 The saying goes every dark cloud has a silver lining and the silver lining was in a crate of parts Robbie Grey had failed to sell at a recent swapmeet – “little interest in the old stuff these days” – inside was a twin cylinder Nilmelior coilbox that had not sold for the princely sum of $20, needless to say it found a new home on the dashboard of my taxi, not to mention a Dubrulle oiler. 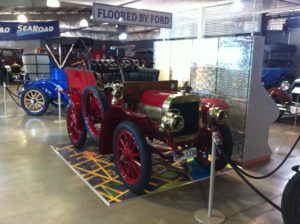 In the meantime the next day was spent reassembling the car, without engine, and find lodgings in the Wonders of Wynyard where it will remain until the engine progresses up the queue at Greys. The saga will continue.