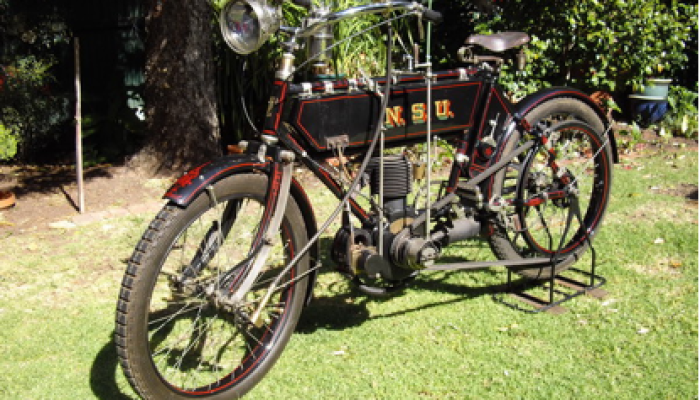 The history of the marque can be traced to 1873 when in the German Duchy of Swabia at Riedlingen two mechanical engineers, Christian Schmidt and Heinrich Stoll established themselves as knitting machine makers. By 1886 their island factory on the Danube afforded no room for further expansion. Schmidt left Stoll and established works at Neckarsulm, a town on the river Neckar near Heidelberg.

Cycle production commenced under the name Germania first with penny-farthing design in 1886. By 1890 the 60 workers had produced 1000 cycles. In 1892 the name NSU NECKARSULM STRICMACHINEN UNION was adopted, stricmachinen being a sewing machine.

In 1900 the first motor powered cycles left the factory, 100 in number. This was overshadowed however by the production of 7000 cycles. Engines were from other suppliers including Minerva from Belgium and ZL (or Zedel) from Switzerland. By 1904 NSU were producing their own engines and by 1908 they were supplying other manufacturers who, like NSU a few years earlier, were painting their names on the tank.

The 1905 NSU is the first year of the unique ‘pull rod’ mechanically assisted inlet valve and the equally uniquely arranged leaf spring front forks, the spring blades following the curve of the forks.

Frame numbering was consecutive from the start, useful information for the restorer. 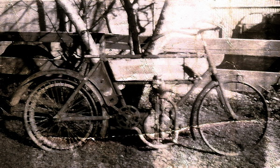 The 1905 NSU featured here has a 3hp 75mm x 75mm engine, although smaller and larger sizes were available, even a 4hp twin. Ignition is by an Eisemann low tension magneto with a separate wood cased high tension coil carried in a separate compartment in the oil tank. The carburettor is best described as an invention of the devil. While the float and mixing chambers are of the simple type, the throttle is operated by rotating a tube which extends to the top of the fuel tank. The tube is the extra air inlet, in turn controlled by a sleeve within, uncovering a port when rotated by another lever.

One innovation which would have made a lot of money for NSU is the two-speed gear contained in the engine pulley. These were sold as an accessory to be fitted to other makes as well as to NSU, and they were one of the first satisfactory free engine devices available. While the epicyclic gears are tiny, the clever lubrication by a drilled main shaft breathing crankcase fumes into the gear seems to have given the unit a longer life than might    be expected. The first requirement to ride the NSU is that the rider have four hand, two for the handlebars where the valve lifter and rear brake levers are located, one for the ignition clutch and gears on the left of the tank and one for the throttle and air on the right. Oh yes, there is also the hand oil pump for this hand too.

The procedure to get under way is worth re-counting. With petrol on and carburettor primed, ignition half advanced and the gear in high, start pedalling. The engine fires and is brought to idle by ignition and throttle adjustments and neutral selected. With the rear brake applied to stop the wheel spinning, lower the stand and mount up. The trick is then to open the throttle with the right hand, engage the clutch carefully with the left, and move off with no hands left for steering. 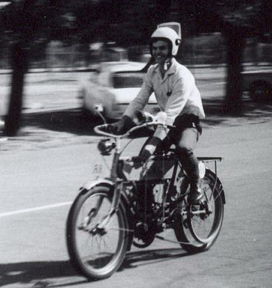 Those who have witnessed this process say it is frightening to watch. They should try it from where I sit.

The model was fairly popular in its day, often featuring in competition results of the time. I had collected many parts over the years, and had seven timing cases at one point. They have been disbursed to various enthusiasts, but so far as I am aware, this is the only running example in Australia. I bought it for two pounds, provided by my Grandfather, while I was still at High School. The previous owner must have wondered about a schoolboy wanting the remains of such a thing, and I suspect it was because he had collected so many early motorcycles that it was possible for me to have the NSU. It has been with me for over 50 years.