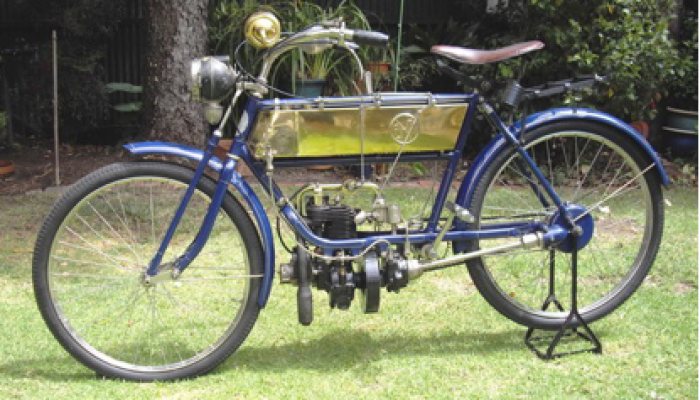 Until 1908 FN single cylinder motorcycles were belt driven in the conventional way. They were unique however in that the engine was mounted in a divided front down bar of the frame. In other words, the front down tube split at the engine and passed around it. This same feature was carried over into the shaft driven model introduced in 1909.

The engine was turned through 90 degrees and drove through a cone clutch into a two speed gearbox. Unlike the four cylinder model, the driving shaft is exposed, and drives through a cardan joint into the crown wheel and pinion rear axle.

Very few motor cycles are so designed, the Militaire from USA and the Wilkinson from England spring to mind. BMW many years later followed the same layout for both twin and single cylinder models. The single BMW having another unique similarity with the 1920’s FN in its side operating kick starter. The frame and forks of the single have many similarities to the fours of equal year. However the front forks differ for the single, where each articulated blade contains a pair of springs within the tubes, between which a piston is sandwiched. The pistons are attached to struts rigidly connected to the steering head. Whether by accident or design, when the pistons are a reasonable fit and lubricated, there is a definite damping effect through compressing air in the fork tube. A precursor of the Teledraulics of 20 years later? 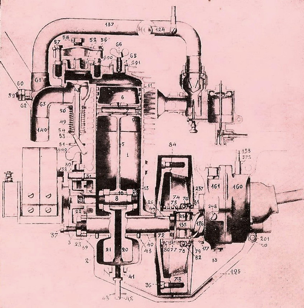 The engine, like so much of the FN , is also unconventional in that the crankcase and cylinder are one piece. The lower half of the crankcase separates at the main shaft, motor car sump style. As with the earlier singles and fours the crankcase is of fine grade and quite thin cast iron. FN cars of the same period also followed the practice for crankcase and gearbox where most were using aluminium. The FN factory obviously had foundry techniques as good as anything available now, and Belgium is still regarded as the best source of fine iron casting. Another interesting feature of the one-piece cylinder and crankcase is the access to the double side valves. No screwed plugs to seize and fret with heat corrosion but a single oblong plug rounded at the ends and held in place by a substantial bayonet- fixed cross bar and set screw.

The magneto is uniquely FN. Like the Fours it is flange mounted to the timing case clearing the front mudguard only just. Because these magnetos are dedicated the Bosch numbering is likely to date the motorcycle as well as the magneto. For the first year of production only, illustrations show double magnets and for all models the timing was fixed. FN developed the simple carburettor very early in the piece and retained the design to 1910 for the singles. They were also sold in quantity to other small volume assemblers. However, with the simplicity of the carburettor came the complexity of a separate throttle valve.

On the early belt drive models this was achieved by incorporating the throttle with the automatic overhead inlet valve housing. When the side valve 1909 model arrived that option was lost and a separate barrel valve was inserted half way along the inverted ‘U’ of the brass inlet pipe. A separate air control sleeve is attached to the body of the carburettor and controlled by a duplicate of the throttle system.

For 1910 and beyond the more complex variable venturi carburettor as fitted to the four was also used on the singles, although an extra air collar is still used. It is hard to imagine why they bothered when the complexity still failed to provide automatic mixture correction. Also in 1910 the cone clutch was replaced by a multi-plate disc affair, which is too heavy for the little built-up crankshaft. Years ago a friend bought a collection of FN motorcycles, including no less than six of those motors all with destroyed crankcases, crankshafts and con rods, through the mass of the flywheel either working loose from its taper or working the crankshaft apart. There was no evidence of the same thing with the cone clutch model, one of which ran regularly in rallies here in the 1960’s. 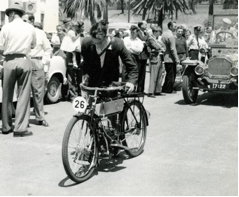 With various changes, the model continued to 1922 or so when it was replaced by a more conventional chain drive 350 cc with outside flywheel.