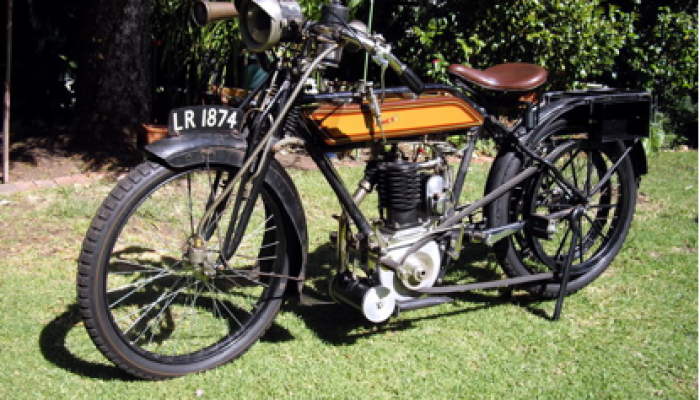 The Villiers-powered James lightweights of the 1940’s and 50’s are so well known that the proud history of the marque is often overlooked.

Like so many other makes the James Cycle Company’s heritage begins in Birmingham, in this case in 1880 at Constitution Hill. Harry James was the founder and his product was the standard penny farthing cycle. Harry retired in 1897 and the company was then managed by one Charles Hyde, from its now famous Gough Road, Greet address. There was nothing remarkable about the addition in 1902 of a Minerva 2.5 hp clip-on engine to the James safety frame, suitably reinforced.

It seems that from the earliest times James was entrepreneurial. They had a clip-on engine made in Northampton and named the Derby and marketed under that name, perhaps so as not to risk their masthead with a local untried engine. James continued to fit imported engines to its own motorcycles.

For 1904 a FN engine replaced the Minerva but otherwise the James was conventional. That changed radically in 1908 when a new design appeared. The wheels were overhung. supported on one side only, with the belt drive on the other side of the frame, driving a live rear axle. Starting was by cranking the rear axle with a removable handle and a crude clutch was effected by drawing apart the flanges of the engine pulley. This model was powered by James’ own engine. Internal expanding bronze brake shoes operated in a steel drum, just as FN had introduced in 1905.

The motoring press and the public were fascinated by the innovation so many years ahead of similar modern European designs, but sales were slow.

In 1912 a conventional but well made machine with a 550 cc engine appeared. The unique ‘pineapple’ finning was first seen, where each successive square flange was staggered at 90 degrees. According to the handbook, this arrangement provided more efficient cooling through the extremities having more air available than with conventionally arranged fins.

From 1912 a Villiers hub clutch was available (Model 2) or a three speed Sturmey Archer hub (Model 3). The connection made with Villiers was to become important in the future of James.

The Villiers rear hub clutch is interesting in that unlike the Triumph and most others which employ disc clutch packs, it has a series of concentric sleeves, alternately bronze and steel, and each split lengthways. A set of shoes is expanded by a tapered sleeve which slides along the axle spindle and which is operated by a rod through the hollow axle by a bell crank and a clutch pedal. When expanded the sleeves are compressed radially to seize against the hub shell.

There are several variations in these clutches. A friend gave me a shell which is similar except for a dental positive drive which engages once the friction clutch takes up. Yet another variation is shown in an early Motorcycling Manual with a simple positive dog drive as a last stage. Whether I will regret mine having neither of these positive lock-ups is yet to be seen.

James offered a two stroke in 1913 with the same pineapple finning as its big brother. Also in 1913 appeared James’ two and three speed gearboxes, with a very neat all metal clutch and enclosed chain drive. This made for a high class tourer, but for fear of alienating the belt drive fraternity the alternative transmission remained available until 1915. 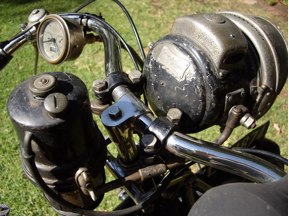 The class of finish of these James always appealed to me and when the opportunity arose to own one it was no decision at all. However, the circumstances were quite sad. The previous owner in England had dismantled the engine and rear clutch hub to recondition the worn parts. The saddle pan had been sent out to be re-covered when the owner died, the scattered parts never to be re-united. There is a clear message here – keep a record of where parts have been left so they can be recovered.

Fortunately I located another engine for spares. A member of the UK Vintage Motorcycle Club responded to my plea for details of the missing hub clutch parts and equipped with drawings, salvage was possible. This is a good illustration of the benefit of the Club advert system which has helped me on several occasions.

Although re – instatement of some major parts has been formidable, the James is a very original machine, with Bowden controls, lamps, taps and even number plates intact. The catalogue lists Senspray, AMAC or B&B carburettors. In this case it is a B&B with top fuel feed.

James’ first post war model was in 1922 when a special 7hp V-twin sidecar was released, In 1928 an OHV 500 twin replaced the old side valve model.

For a period James fitted the Villiers two stroke engine to their lightweight but resumed manufacture at Greet of their own engine in 1932.

A very distinguished figure from the earliest days of engine production joined James through the acquisition of a small frame maker named Bakers. The outfit was headed by Frank Baker, the founder of the Precision works.

James survived independently through its range of soundly built two strokes until 1951, when it was absorbed into the Associated Motor Cycles group. The name continued until the 1960’s when the Japanese onslaught put paid to the Famous James – just a few years short of its century.