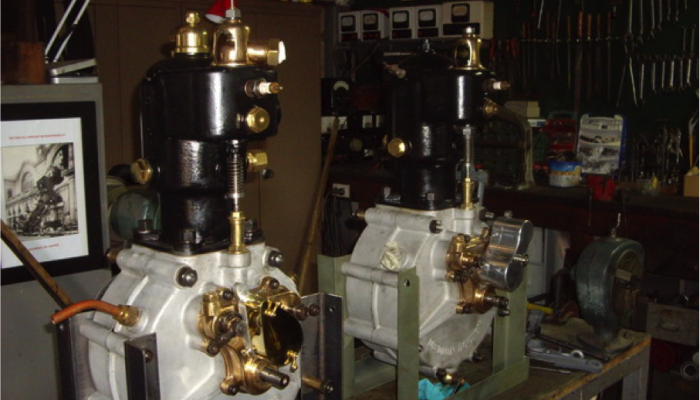 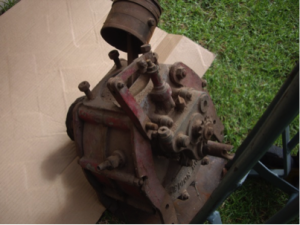 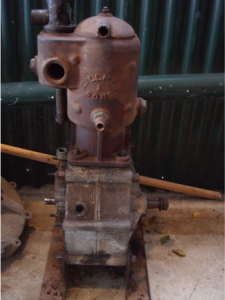 When these are finished it will bring my total of De Dion automatic inlet engine rebuilds to eight. In my view they were the best of the lot, both in design and manufacturing standards. These two are 1903 and 1904, and most parts are interchangeable up to 1909. The oiling system worked well, and provided the crankcase is drained and a half pumpful is used to start the day, just a little now and then does the job. Julian can tell you what happens if you don’t drain the crankcase before starting!

As the re-building of the twin single cylinder motors progresses there are some interesting developments to report.

Mention was made of some replacements being needed, one being a connecting rod and another, a rear main shaft. At some time a big end had dissolved and the rod had been rubbing on the flywheels, wearing the webs down to the beam. In an earlier repair the rear main shaft thread had been abbreviated, leaving no room for the De Dion locking device which is fairly important in preventing the drive coupling from parting company. The other motor had the most worn out cam and follower that I have ever seen, and was missing the exhaust valve retarding mechanism, water pump drive etc. 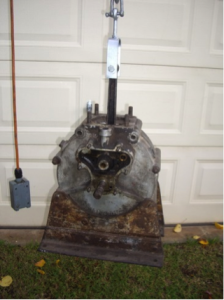 Another crankcase with bottom end was offered by a kindly Member, which yielded a con rod, but as it had done service as an air compressor, had no timing case or gears. Yet another motor was brought back from storage whence it had lain since it left the Vinall De Dion collection. It has a foreign cylinder, looking very like De Dion, but carrying the name ‘Illman & Son’ and we find that there was one of that ilk, an engineer, at Maude Street, Parkside in the 1920’s. The crankcase is De Dion, and the timing case contained all of the needed trimmings. The motor had been expertly mounted on a hot riveted frame, and the remains of a well-made non-de Dion governor mounting on the timing case is further evidence of a better than average fit-out. At the said address, amongst gentrified housing sits an old galv. Iron workshop. It seems that old De Dion motors were converted to stationery engines using cylinders cast by one of the many foundries around Adelaide at the time. There were about 10 in what we now call the CBD, even one in Hindley Street.

When the cylinder was removed, it was obvious that a larger bore had been cast and a heavier forged con rod fitted. The automatic inlet valve cage screws in, rather than the bayonet De Dion system, and the cage and valve are larger. The motor probably was upgraded from 8 to 10hp.

During the search for parts yet another motor was found, fairly complete, but interestingly it has no number stamped in the usual place. There is no evidence of tampering, the flats looking like they should. The possibilities are that maybe if a replacement was bought it came un-numbered, or that it is one of the knock-offs cast and machined by Lewis, a photo of the process in action being part of the Lewis factory collection. Either way, an interesting dating problem down the line! Registration commenced here in 1906 and records show that by the end of 1908 there were over 80 single cylinder De Dions registered. A few might be double-counted as some might have changed hands with the first owner retaining his number for another car. Offsetting that are the pre-registration De Dions which, like a number of examples of other makes exist, didn’t survive to be registered in 1906.   However, motors did survive in large numbers, due to their utility for other purposes. 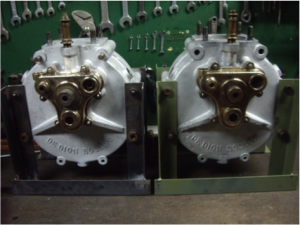 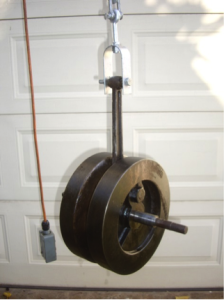 The South Australian Registration records were lost in a fire in the 1920’s and George Brooks spent many years re-constituting them to 1926 from lists published in various periodicals, motoring magazines etc of the period. Some of those lists did not include the make and model, so period photos showing the plate were used whenever available to close the gaps. That work continues and I would appreciate the loan or a copy of any photos which may assist. However, none of that provides the engine numbers which the original records held, so we will never know the original owners of these 5 engines here at present. However, about 30 years ago while working with the late Laurie Vinall on various projects I restored a 1902 De Dion, and Laurie handed me his hand-written list of all De Dion singles known world-wide at the time, their owners, engine , and in many cases, transmission numbers, and any other details. Some of course are in other than De Dion vehicles. My job was to continue adding to the list, which I have done, as motors continue to turn up, and one day if I can remember how, it will become a spreadsheet.

Teach your grandchildren to drive your veteran!
February 3, 2015
A Different Napier
September 22, 2014