Denman’s Delages – A visit to ‘The Shed’

Julian ‘phoned to say that we had been invaded by Tasmanians, and I suggested that just as England at one time had trouble with the Vikings, once they intermarried, learned the language and had taken all the good stuff, they were no longer a problem. As Julian must continue working to pay for his indiscretions, he thought that maybe the visitors could call mid- week to have a look at the wreckage which resides here. Jill and Peter were our hosts when we were in Tas. For their 50th Anniversary rally and we were delighted that they could call, along with their travelling companions Marie and Kevin. They were entrants in the Bay to Birdwood Classic, and were then travelling together to W.A. with a trailerload of veteran motorcycles to the event for which the Presidential Rudge has been prepared. Ken Hall of Naracoorte Leon Bollee fame also has several bikes on board.

Realising that looking over the few vehicles here wouldn’t take long, and as more rain prevented us going for a drive in one of them, we arranged to visit Adrian Denman’s shed. 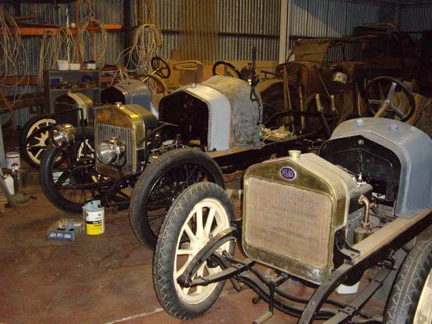 My visits are always educational, none the less on this occasion. I found that the veteran Delage population had increased. Where two had been parked side by side, there was now a third, slightly younger model nestled between them. They are breeding !! The photograph shows the 1909 Type L to the left, the 1910 Type TR to the right, and the ‘new’ 1913 Type AI between. Turns out that it had been hiding at Adrian’s residence, and along with Adrian, had been kicked out. Not true of course, but Sue says he spends so much time there — where have we heard that before?

The new arrival came from Peter Crauford many years ago when he owned a property at Policeman’s Point on the Coorong, and arrived mainly in boxes. Peter called here during Show week, to talk Vauxhalls as he has one like mine, yet to be finished. He mentioned a veteran S.P.A. which he once found and I opened the Pedr Davis book to show him that one. Sure enough, it was the same car, and he went on to show half a dozen others in the book which he had owned. That’s not counting the Delage, David Reade’s Benz and Brennabour, the Rainsford’s Sunbeam and Talbot, and even Peter can’t remember how many more.

I have since spoken to Peter, who tells me the Delage came from a farm at Bridgewater, central Victoria where it had been since the 1920’s. The farmer poured a bottle of petrol into the carby bowl and it started and ran like a bird. Reason was that with one rear wheel jacked the Delage was powering the chaff cutter. The body had fallen apart but it was mostly present.  One is powered by a sidevalve motor branded Delage, but in all probability is an 1800 cc Ballot. The other carries a Chapius Dornier ‘F’ head with a curious plenum chamber surrounding the inlet cages, but integral with the non detachable head. What a casting!! It is likely to be their 2120cc motor. 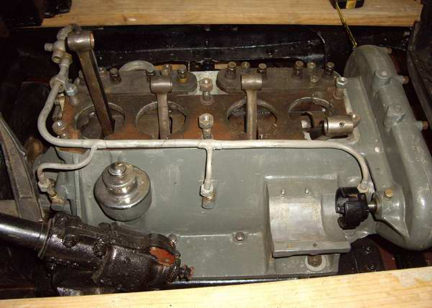 The 1913 has a 75 x 120 motor, 2.3 litre. Peter had started work on it and had given the gear lever, handbrake and gate to a friend to deliver to the platers. When Peter came to Adelaide he called to see if the job was done to find a vacant block of land. The plater had passed on and the relatives had demolished the building and scrapped all unclaimed jobs. Had that not happened, Peter may still own the car !! 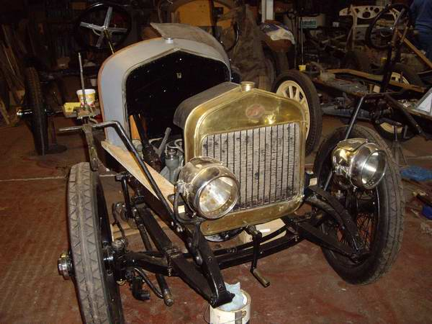 Work is well advanced on the 1913 Delage, and you never know, could make it to the annual rally next year. That’s provided the Lago-Talbot, Delahaye, Nagant or any others don’t divert the effort !

Lurking in the background is an ancient 7 litre 4 cylinder ‘T’ head Nagant Hobson. This article, is not big enough for that story. Maybe next time.