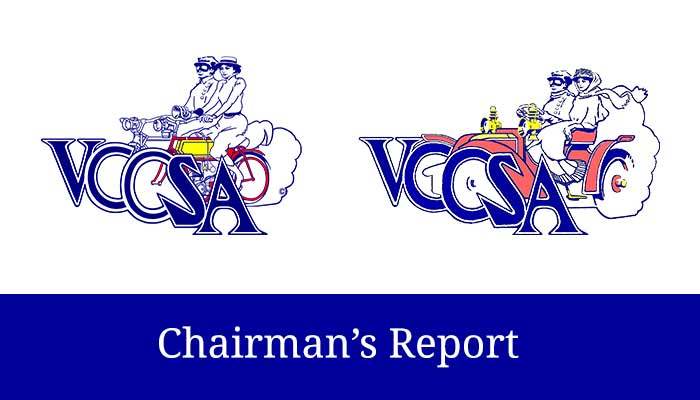 As we reach the end of a very busy month for our club, I am mindful that the start of this month commenced with the passing of VCC-SA member Barry Foster. His interest in all things veteran (bikes and cars alike) will be missed by many. I am sure many of you would have your own special memories of Barry and his pre-war vehicle exploits.

The social side to our club came to the fore recently with a solid turn out of members at the film night organised by Tim Rettig. Those attending were treated to the screening of the film “Sully” followed by a very filling supper. Thanks for your efforts here Tim, it was a great night for all.

It was certainly a busy month for our veteran vehicles that commenced with the Creepy Crawly Run. This was our first club event in a long time in which a veteran motorbike participated. Thanks for that extra effort, Larry, to share your 1903 FN with those on the run. It still has a great turn of speed for its age, because the Austin 7 on the run struggled to keep up with you. Not sure if this is a great method for comparing your speed, but you presented a challenge for it to keep up with you!

The Motorfest Run, hosted by our club, was also well supported as the vehicles journeyed around the city and finished in the Port Adelaide area. Neil has some stories and images of the event to share at the upcoming Gathering, along with some further images of the Bay to Birdwood Run. Talking of the ‘B2B’ this has been a rather interesting event in the past with some members speaking highly and others not so. Your Committee has argued for a better hearing of our needs leading to this year’s event and whilst some of the requests were met, some promises fell short. I think the better relationship with the organisers can only be a positive as we continue the conversation for future Runs. Of particular note was the number of veteran vehicles taking part from interstate. We were lucky to see David Wright from Victoria in his 1911 Fiat and Chris Sorrensen from Queensland in a 2 cylinder Model F Buick. Chris’ journey to take part in the event was particularly interesting to hear, as they had to make an extensive detour to get around the flood waters in regional NSW. It’s amazing to think that at this time last year we were experiencing a heat wave of 35 degrees! Well done and many thanks to all VCC-SA members for taking part in this iconic event and sharing your wonderfully presented vehicles with the general public.

Your Committee continues to reflect on the feedback gathered through the forum process and as such next month we will be offering a shakedown run the day before the London to Brighton. So those of you who like to make good use of your vehicles when you get them out and ready, or who run their vehicles on a special permit, would appreciate the opportunity for a morning shakedown run the day before. See details later in the bulletin for this.

Some further new initiatives for our club are also un-folding, with next month being the first of what could be a regular format where members can share an update on their restoration projects. In the lead up to this, our November Bulletin will feature a list of vehicles undergoing restoration by club members. If you would like to share your vehicles details, please let a member of the Committee know so your vehicle can be included in this list.

Some members over the Christmas break have asked if there is interest for a possible run. The Committee has supported this request with early discussions on the possibility of a Proclamation Day Run(28th Dec). The run will leave and head down to the Old Gum Tree ceremony and then wind its way to Kingston House for their well renowned Devonshire Tea ($10 per person). We need around 20 members to take part for this to occur. If you are interested in taking part, please indicate this at the Gathering on the sheet provided.

Finally, November is the National Veteran Rally in Tasmania. Several VCC-SA members and I will be taking part, so I would like to get in early and offer my apologies for next month’s Gathering.

See you on the road in your Veteran soon.